This is a selection of articles about Margaret Mahy. Many more articles exist, some of which may be located through Christchurch City Libraries the Source online resources:
(Please note: you will be prompted for your library card number and password / PIN to access the Source).

Margaret Mahy dies: Tributes to great NZ author 24 July 2012
Stuff reports on the death of Margaret Mahy, and gathers tributes from her fans.

Interview with Margaret Mahy
The interview focuses on her writing process and the difficulty of writing for the US market while living in New Zealand.
Horn Book Magazine, 85.6, Nov-Dec 2009
Rhema says no to Mahy
Radio Rhema cancelled an interview with Margaret Mahy because the humour in her new book (Awesome Aotearoa) was too “disrespectful”. Margaret is quoted as saying: “I don’t feel upset by it. You just become reconciled that not everyone is going to read the text in the same way; that’s the mystery of reading. I don’t set out to offend.”
Nelson Mail, 9 May 2009

Aliens in the landscape
The author, Sarah Fiona Winters, explores the idea that Mahy’s books reflect the European settlers’ experience of living in the ‘alien’ Aotearoa, and suggests that this experience is represented by the journey through adolescence.
Children’s Literature Association Quarterly, 33.4 (Winter 2008).
Interview with Yvonne Mackay and Margaret Mahy
World-renowned children’s author Margaret Mahy and director Yvonne Mackay talk to Clare O’Leary about their work together. Margaret discusses the different processes of writing a script, from devising new ideas, to seeing the adaptations of her books come to life on the screen.
Video posted by Screen Talk on New Zealand On Screen, 9 Dec 2008
Eight months to Mars - Margaret Mahy
Her children and youth related books have been translated into at least 15 languages!
Interview by Jim Mora, Afternoons with Jim Mora, Radio New Zealand. [11.5MB MP3] 5 May 2008.
A life of adventure, mystery and rhyme
An interview with Margaret Mahy on her 72nd birthday. In it, she relates the first poem she ever wrote at age four.
Dominion Post, 5 Apr 2008.

New Zealand voice hard to find for authors by David Larsen
“It’s a curious thing, because everyone thinks of country landscapes and things like that as being the essential New Zealand identity, but I started edging back into New Zealand through the city.”
New Zealand Herald, 8 November 2005. 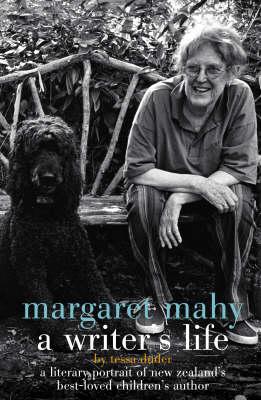 Margaret Mahy: a writer’s life: a literary portrait of New Zealand’s best-loved children’s author by Tessa Duder
A new book about Margaret Mahy, written by friend and fellow author Tessa Duder.
Released May 20th, 2005 by HarperCollins.
Mahy’s magic
“Christchurch writer Margaret Mahy is finally starting to attract some of the serious attention within New Zealand that she has long had overseas”, writes Kristi Gray.
The Press, 14 May 2005; D:6.

Margaret Mahy 2004
“In a bedroom-cum-office in a house over-looking New Zealand’s Lyttelton Harbour lives and works children’s author Margaret Mahy. Surrounded by photographs of her children and grandchildren - My family keep an eye on me all the time I work - and by books stacked floor-to-ceiling…”
Good Reading Magazine, October 2004.

The river of stories by Neil Young
Margaret Mahy’s latest novel, Alchemy, recently won the Senior Fiction category of the New Zealand Post Children’s Book Awards. “There are always ideas in the world out there,” she says – “for me, and for anyone interested in writing.”
Tearaway, 2003(?)

Interview with Margaret Mahy by Julia Eccleshare
Margaret talks about her early influences and being a New Zealand children’s author.
PaperTigers.org, July 2002.

Places in the heart: writer Margaret Mahy is haunted by a southern peninsula called Mansons Point.
‘In due course the peninsula came up for sale and I bought it. My accountant asked me what I intended to do with it. “I’m buying it as an act of imagination,” I said… he pointed out that it would be hard to claim tax against such a category.’
North and South, June 2001, p122.

Myth and folktale in Margaret Mahy’s young adult novels by Janine McVeagh
Finds that European myth and folklore are an integral part of the writer’s young adult (YA) stories. Examines 7 novels: ‘Aliens in the family’, ‘The tricksters’, ‘Dangerous spaces’, ‘The catalogue of the universe’, ‘Memory’, ‘Underrunners’, and ‘The other side of silence’. Discusses patterns of narrative; good and evil duality; the hero, witch, stepmother and father figures; motifs and symbols; and names.
Talespinner, September 1999; 8: pages 17-22.

The ghost of Christmases past by John Goulter
Talks to Margaret Mahy, Bill Payne and Miranda Harcourt about how they celebrate Christmas.
Evening Post, 23 Dec 1992; page 19.
Turn off TV, turn on to books by Pat Baskett
Introduces the Great NZ Television Turnoff organised by the Library Assn. Reviews the display of children’s books, and discusses the Māori collection, collected by Sir George Grey, at the Auckland Public Library. Notes how the Dewey classification works.
Margaret Mahy comments on the need for a balance between books, television and other pursuits.
New Zealand Herald, 17 Jun 1992; pages 2, 7.

Margaret Mahy: for New Zealand and around the world
Deseret News, 25 September 1988