This story and illustrations were first displayed as a 'big book' in the children’s section of the Central Library during Christchurch’s Books and Beyond Festival in 1998. Margaret Mahy set the story in and around the Central Library in Gloucester St. Bob Kerr painted the pictures during the time the book was on display. The library thanks author and illustrator for their permission to make the work available electronically. 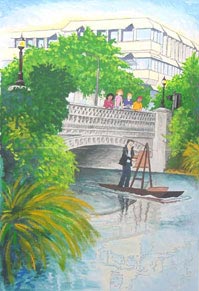 It was library day for Jason and Jemima, Sam and Daisy and they were walking over the bridge on their way to the library. Jason was taking photographs with his new Polaroid camera while Jemima danced around, striking silly poses or pretending that she was going to push Jason into water. Daisy suddenly stopped and pointed. There in the shallow river swam the reflection of the library. It shimmered eerily and then suddenly seemed to take on a rippling life of its own.

The ripples were made by a strange black punt sweeping out from under the bridge. A tall black figure stood in the punt, not pushing it along (for the punt seemed to travel under a hidden power) but painting. Paint brush in hand, the figure bent like a shadow towards a tall easel. It was strange to see someone swaying with the current and trying to paint a picture at the same time.

The painter heard him. His gaze switched toward them. His brush danced in his hand like a magician’s wand. Then the punt disappeared. One minute it was there and then it was gone.

Where did it go? cried Daisy, blinking.

It went into the library — not the real library — the reflected one, cried Jemima. She sounded frightened. 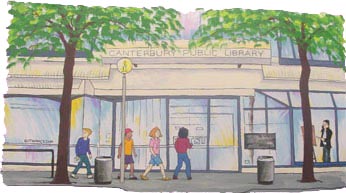 It went under the bridge, said Jason scornfully. I wish I had had the time to take a photograph. Now that painter has gone forever.

But the children were in for a surprise. They arrived at the library and went in through the glass doors marked ENTER. There, before them, was the same dark figure that had swept past them on the black punt. How had he reached the library so quickly? Yet there he was with his canvas and his easel. Children and parents slipped around him and began playing with computers or looking for books. After all, no one likes to disturb an artist. 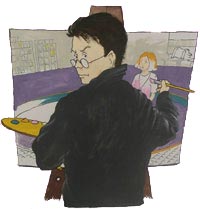 But as Jemima did her slipping-around, she stopped and stared. The painting was a painting of the children’s room of the library and there, on the top step of the library story-telling pit, stood a figure of a girl with fair hair like her own hair and wearing her own pink shirt and blue trousers…

Look, she cried in astonishment. I’m in that picture.

I always like to put a pretty girl into my painting, said the artist, smiling at them. He had very sharp eyes, but his teeth were even sharper.
I’ll pose for you, cried Jemima, delighted to be a real model in a real painting.

Sam, Jason and Daisy left her posing gracefully. While Sam looked through the bookshelves, and Jason played on the library computers, Daisy went to talk to her friend Ms Lyddie, the children’s librarian, who was sorting books at the issue desk. 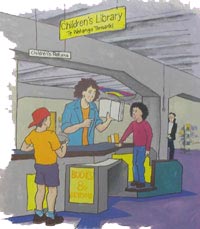 That’s funny! Ms Lyddie said suddenly. Look at this copy of Charlie and the chocolate factory. The pages are empty. Look! No story! No pictures!

As Daisy stared in amazement Sam came up, looking amazed too, but for a different reason.

Look what I found by the computers. Jason’s Polaroid camera. He’d never leave his camera. So where is he? 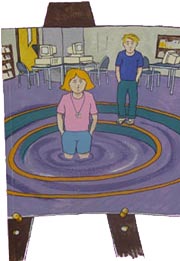 Sam and Daisy searched for Jason and Jemima. That painter’s gone too, said Sam uneasily, and he and Daisy glanced at that painting still propped on its easel. Then they had an eerie surprise. There were now two painted children in the picture, one on the top step of the story-telling pit, the other deeper into the pit, almost as if she were vanishing into it.

Yes she was! But she isn’t now, said Sam.

They stared at the picture scarcely able to believe their eyes. There was no doubt about it, Jemima was now right down in the story-telling pit and a boy stood on the top step…. Jason.

I wonder what would happen if we painted ourselves into the story-telling pit, said Daisy slowly.

No, said Daisy, but suppose we asked Ms Lyddie to take our pictures with Jason’s polaroid camera. Then, when the picture developed, we could put it into the story-telling pit in the painting — there beside the painting of Jason. What do you think would happen? 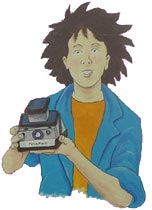 Dunno! But suppose, said Sam, … just suppose … we really were sucked into the picture. How would we get out again?

Ms Lyddie would just pull our photograph away, and we’d be back here again, said Daisy. Come on! Let’s ask her.

Ms Lyddie agreed. Click! Click! The photograph was taken. Slowly, slowly the picture appeared. Daisy and Sam smiled out of the photograph standing side by side in the round story-telling pit of the children’s library. 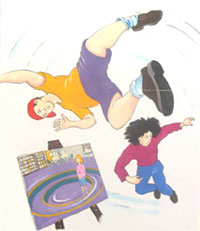 Ms Lyddie laid the photograph, very delicately, against the painted story–telling pit. Suddenly, a vast and icy wind swirled out of the picture, spinning the two children up and away. Sam gasped and clapped his hands across his face.

He was still in the library, but now it had changed. It was full of trees. Where are the books? cried Daisy beside him. Not only that, it was a painted library. Nothing around them was quite real. 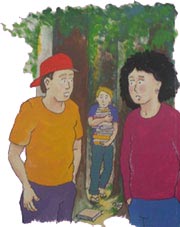 No! there was something real after all! Jason was coming towards them with an armful of books. He stared at Sam and Daisy in horror.

Has he caught you too? he cried.

Other children were moving through the shadows of the forest beyond him, all pale, all lost and strange, all carrying books.

The painter’s name is Mr Mephistiana, cried Jason. He’s a wicked spirit who is always to trying to ooze his way into the library through shadows, reflections and pictures and now he is here and he is powerful. He is eating the stories.

He’s a word-eater, said Jemima, appearing beside them like a ghost of the forest. And he’s painted us into his picture to fetch and carry for him — bring him stories to eat. And every time he eats a story here … in the painted library — the reflected one … it vanishes from the library out there.

So that’s why the pages of Charlie and the chocolate factory were blank, cried Daisy.

At that moment a wild voice echoed through the forest.

Bring me Through the looking glass and what Alice found there, it shouted. I am going to eat the poem Jabberwocky. 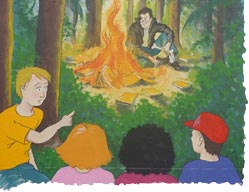 Through the trees Sam and Daisy now saw an eerie circle of spinning light. At the heart of the light was a glittering fire. Beside the fire was Mr Mephistiana. A small bone dangled from the edge of his smile.
That bone is all that’s left of a dragon I had to bring him, muttered Jason. And now he’s going to eat the Jabberwock.

My shadow may be having coffee across the road from the library, but I am really here, like a worm in the library’s heart, he shouted. I’ll feast on words and wonders. I’ll eat every single song, every single story.
How will we stop him? cried Sam. We need a magic word or a good spell.

We need the books, whispered Daisy. Her whisper ran around the mysterious forest like a secret wind.

Something heard her whisper. Something moved in the trees around them. From out of the leaves came flocks of white parrots … thousands of them … millions of them.

Say the magic spell! they screamed. Call on the book-birds.

What spell? asked Daisy. A parrot flew around her.

Read me! it cried, turning a flip in the air. There were black words on the white feathers across its back and over its wings. As it flew away, that parrot turned into an open book. Its wings became flickering pages.
Did you read it? hissed Daisy.

Yes! Sam hissed back. Is that the spell? I think so, said Daisy. Let’s say it aloud.

Mr Mephistiana was shouting from the middle of his whirlpool.
More! More! The more I eat the hungrier I get.

He looked up as they charged through the strange forest towards him. When he saw them he sprang to his feet.

You! he cried. Beware! I’ll tear you to pieces.

Just try! said Daisy. We read the book–bird. We know the spell.

Then, together, Sam and Daisy shouted the magic words.
ONCE UPON A TIME …

The whole forest sang a huge chorus around them.
ONCE UPON A TIME … 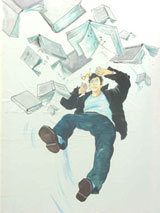 White parrots came flying towards them. No! They were books, flapping their wonderful pages. From between those pages … from the leaves of the forest trees … words fluttered like black moths. The air was filled with little black wings as well as great white ones. Mr Mephistiana’s face twisted with horror as words flew into his eyes and ears. He flailed his arms trying to beat away the books set free by the spell.

The whirlpool whirled and, as it whirled, it put out silver arms. Daisy saw it seize Sam and then felt her own feet whisked out from under her. ONCE UPON A TIME, she shouted over and over again as she was drawn into the heart of the whirlpool. Above her the books flapped and Mr Mephistiana flopped and faded. White pages beat him to nothing. Vanishing into the whirlpool, Daisy shut her eyes. She couldn’t help it.

Daisy! said a voice. Ms Lyddie was bending over her, holding the photograph she had taken of Sam and Daisy. Were you dreaming?
Daisy found she was sitting in the round story–telling pit. It spun around her … slower … and slower … then stopped. 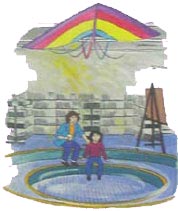 The library was flooded with wonderful light. Stairs, bookshelves, even the pattern on the carpet, seemed to be reflecting sunshine from somewhere. Only Mr Mephistiana’s picture, still on its stand, had darkened so that Daisy could hardly see anything in it any more. As she stared, paint began to flake away from it, falling onto the carpet like crumbling black snow.

Where are Jemima and Jason? asked Sam in a shaking voice. He was in the story–telling pit beside her.

I can’t see them, said Ms Lyddie, but somehow I feel they are safe now … saved by ONCE UPON A TIME. 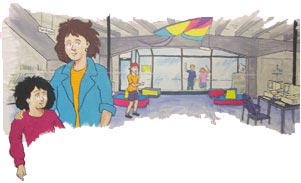 Then, suddenly, Sam saw them, running along the footpath outside the library, leaning against the library window, peering into the children’s room, laughing and pointing at their shoes. They were both soaking wet from the knees down.

Sam and Daisy and even Ms Lyddie ran out through the exit door. They all met together just outside the library.

What happened to you? cried Sam and Daisy.

We found ourselves in the river up to our knees in water, said Jason. We escaped … but we escaped through that reflection in the river. 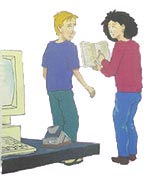 We frightened the ducks, said Jemima. But we don’t care. The book–birds and the ONCE UPON A TIME spell have shrivelled Mr Mephistiana up to nothing.

Oh no! said Ms Lyddie. Mr Mephistiana never shrivels up to nothing … not altogether. He’s always waiting to eat up every story and song. But with good help from the library kids … the ones who know all about ONCE UPON A TIME… he never will!

Daisy ran to the shelves and found Charlie and the chocolate factory. She flicked through the pages. She held it up triumphantly. The pages were filled with print and pictures once more. 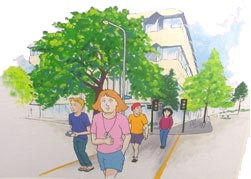 Where’s my camera? Jason cried. Oh there it is! Come on. Let’s move!

So they jigged out to where the sunlight reflected from the film of morning rain. The city glittered as they moved off through it, and, behind them, the library lay like an enchanted cave in the heart of an ancient forest.